The Parliamentary Centre and Carleton University are pleased to invite new parliamentarians to mark your calendars: 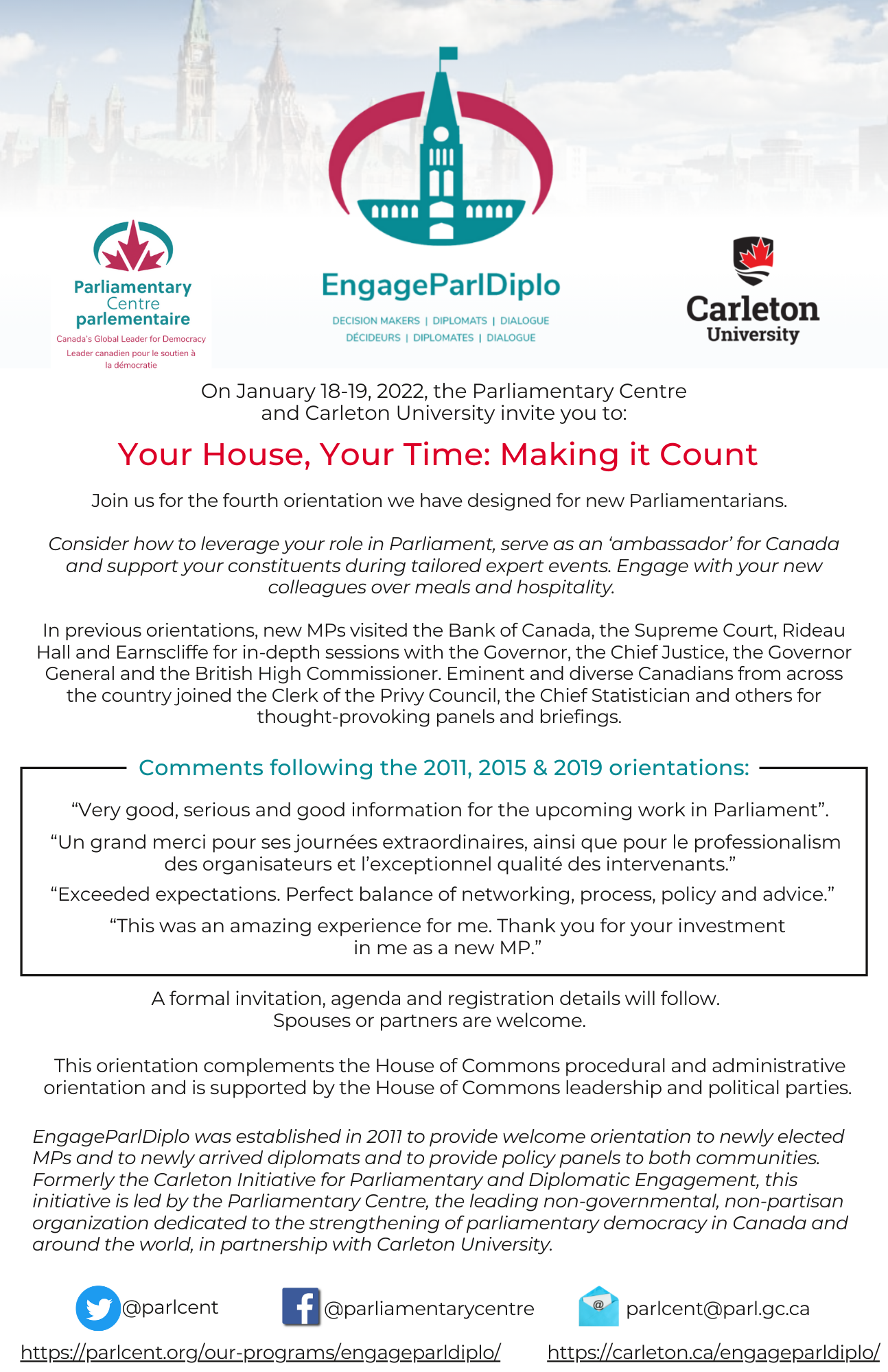 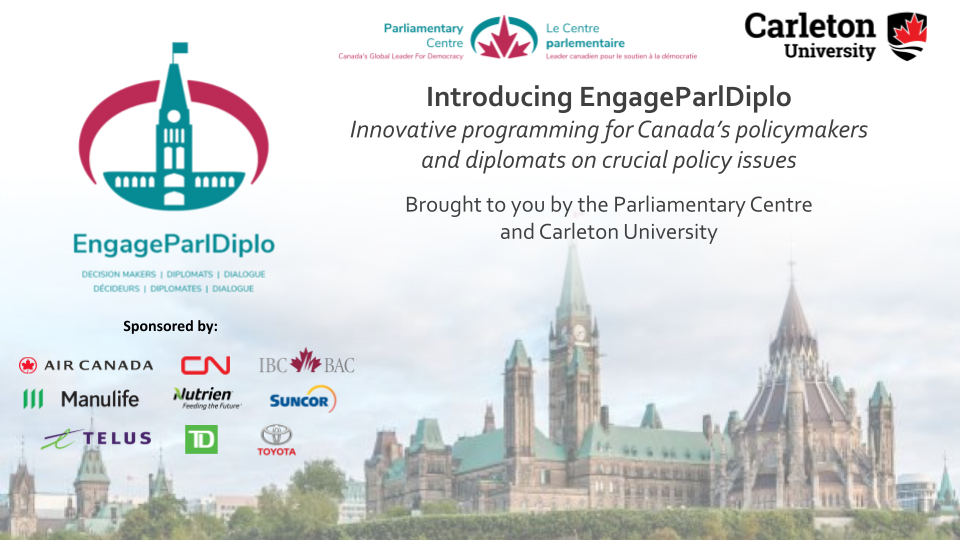 The Parliamentary Centre, in partnership with Carleton University, has established EngageParlDiplo, a unique program where decision-makers and diplomats dialogue about crucial issues affecting Canada’s governance and global influence.

EngageParlDiplo builds on the tremendous success of the Carleton Initiative for Parliamentary and Diplomatic Engagement which, since its founding in 2011, delivered orientation sessions for newly elected Members of Parliament after the last three federal elections and ten annual orientations for newly arrived diplomats to Canada. The initiative has also supported dialogues about vital public policy issues. Since its founding, hundreds of parliamentarians, staffers and diplomats attended panels on issues including cybersecurity and artificial intelligence; Canada’s military, trade and diplomatic relationships; emergency preparedness; energy; food, housing and water. To date, over 250 Members of Parliament and diplomats representing more than 100 countries, including more than 80 Ambassadors and High Commissioners, have engaged in the highly regarded programming.

Building on this foundation, EngageParlDiplo is excited to introduce Global Dialogues, bringing sharper focus to critical questions regarding global democracy, peace and stability. The dialogues will explore important contemporary foreign policy issues by inviting important actors in Canada and abroad to the table. These will include leading domestic and international academics, legislators, business and industry leaders, and organizations in foreign policy, democracy support, development, and security sectors.

EngageParlDiplo will feature many exciting initiatives, including: 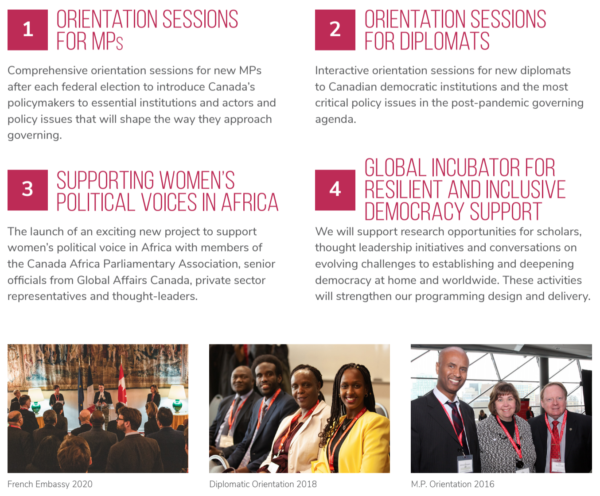 EngageParlDiplo supports consequential conversations that will shape Canada’s evolving role in an increasingly complex world. It will expand your knowledge of critical domestic and foreign policy issues that are essential for Canadian leadership. It amplifies efforts to build more inclusive institutions and benefit our national political and diplomatic communities. Through carefully designed events and activities, EngageParlDiplo strengthens democratic institutions in Canada and elsewhere. 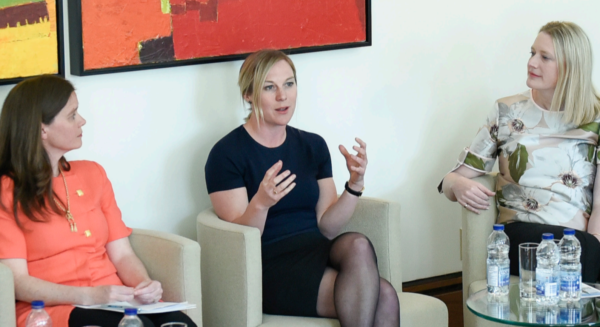 EngageParlDiplo will also feature Global Dialogues to foster meaningful conversations with Canadian and international legislators, diplomats and senior government officials on issues such as: 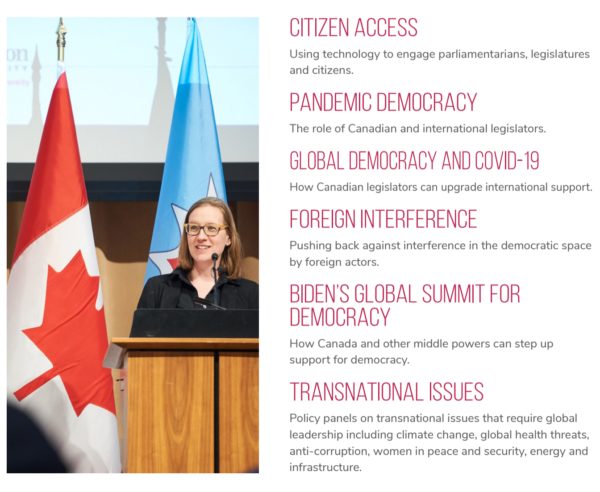 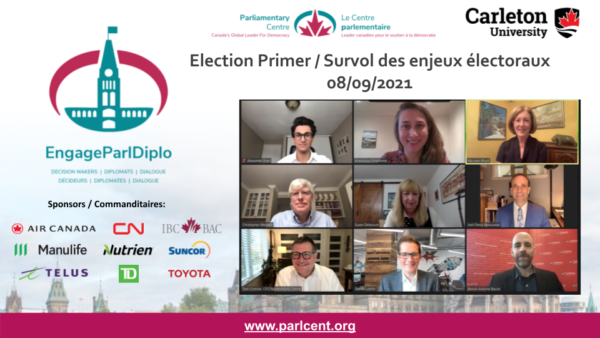 Thanks to the over 200+ participants who tuned it to catch our Election Primer for Diplomats, Politicos and Interested Observers! This inaugural event marks the beginning of EngageParlDiplo, an exciting new partnership with Carleton University’s Faculty of Public Affairs.

Missed the discussion? You can still watch it here: https://lnkd.in/epGdv6vi

Sincere thanks to our distinguished panel: David Coletto, CEO of Abacus Data, Susan Delacourt from the Toronto Star, Joel-Denis Bellavance from LaPresse, and Christopher Waddell, Professor Emeritus, School of Journalism and Communications at Carleton University, for their keen insights and reflections.

With questions from our moderator Maureen Boyd, Chair, Parliamentary Centre and others from the audience, our guests engaged in a thoughtful and wide-ranging discussion on the latest polling data, prospects for the shape of the post-election parliament, the impact of Covid-19 on the campaign, a heightening of political tension and polarization, and much more!

We would like to sincerely thank Benoit-Antoine Bacon, President and Vice-Chancellor of Carleton University, for his participation.

And a very special thanks to our sponsors for making this event possible. They are: Air Canada, CN, the Insurance Bureau of Canada, Manulife, Nutrien, Suncor, Telus, TD and Toyota. 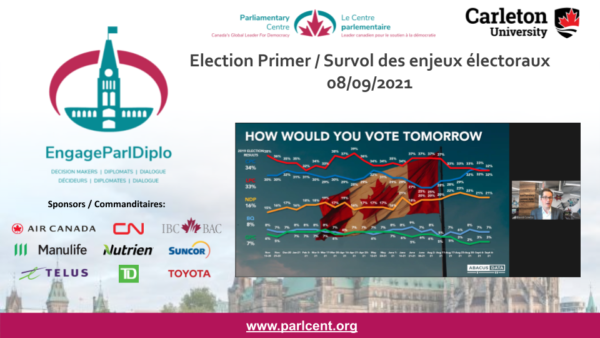 EngageParlDiplo would not be possible without our sponsors: 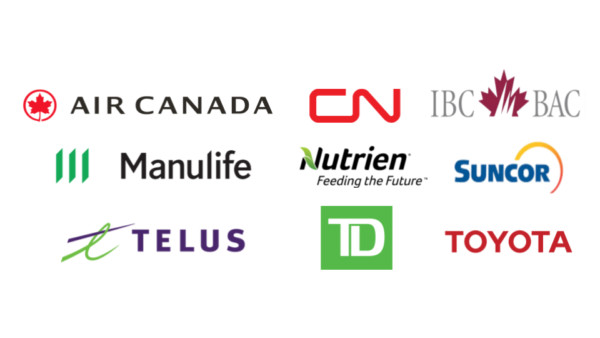 We also thank Earnscliffe Strategy Group for the design of our logo and promotional material.