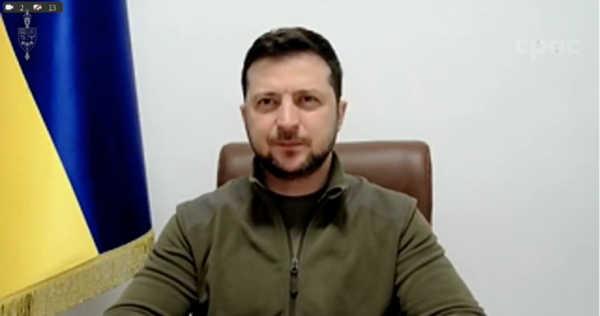 Cross-posted from our partner, the Agency for Legislative Analysis

On March 15, President of Ukraine Volodymyr Zelenskyy addressed the Canadian Parliament to express his gratitude to Canada for the full support of Ukraine during the war waged by the Russian Federation.

A special briefing was organized prior to the President of Ukraine’s address to the Canadian Parliament. Its goal was to exchange relevant information on how Ukraine and its democratic institutions continue to resist the military aggression of the Russian Federation. The briefing took place under the Parliamentary Accountability of the Security Sector in Ukraine (PASS Ukraine) project, jointly implemented by the Agency for Legislative Initiatives (Ukraine) and the Parliamentary Centre. This project is possible with the support of the Peace and Stabilization Operations Program (PSOPs) of Global Affairs Canada | Affaires mondiales Canada.

Dr. Gabrielle Bardall, Vice-President for External Relations of the Parliamentary Centre (Canada), explained the devastating impact of Russian aggression on Ukraine and applauded Ukrainians remaining united and firm in the face of the enemy. She also mentioned that Canada will support Ukraine and its democratic institutions in all possible ways.

“This is a global confrontation between authoritarianism and democracy: between those who respect the fundamental principles of sovereignty and self-determination, and those who believe only in the power of weapons and destruction. The war in Ukraine is also our battle. Because Ukraine is fighting for the future of democracy, freedom and peace. Today, each of us here is deeply grateful for the courage and strength of Ukrainian men and women who today, at the risk of all, defend Ukraine”, said Bardall. 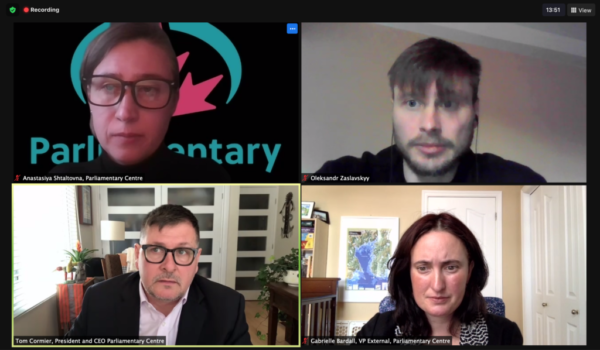 In turn, Oleksandr Zaslavskyy, director of the analytical department of the Agency for Legislative Initiatives, said that despite the martial law and the constant threat to human life, all public authorities continue to work.

“Since the imposition of martial law in the country, the Verkhovna Rada has convened three times. The institution at the heart of Ukraine’s democracy must work. The Verkhovna Rada is a guarantee of legitimate Ukrainian authority. Stopping its work will lead to an unprecedented political crisis, division and disorganization. In case of termination of its work, the ability of the Ukrainian army and state to offer organized resistance will be questioned”, Oleksandr Zaslavskyy explained the importance of parliamentary activity in wartime.

“Despite the unprovoked aggression of Russia, the Verkhovna Rada remains a strong pillar of statehood, showing the world the value of democracy and the resistance of the Ukrainian people. I share the view that democracy and Ukraine will prevail“, Tom Cormier summed up the briefing.

After the briefing, while representing the President of Ukraine Volodymyr Zelenskyy, Justin Trudeau, the Prime Minister of Canada, said that Canada will always be a friend of Ukraine.

“Freedom, justice, truth, human rights, and international order are the values ​​you defend by risking your lives. You remind us that friends are always stronger together. Canada will continue to support Ukraine with military equipment, financial and humanitarian assistance. We will be there to help rebuild Ukraine once the aggressor is repelled”, said PM Justin Trudeau. 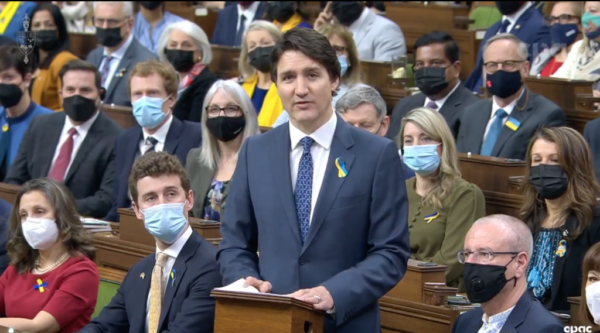 In his address to the Canadian Parliament, Ukrainian President Volodymyr Zelenskyy thanked Canada for its credible partnership and long-term support, but noted that more efforts are needed to establish peace in Ukraine, both from Ukrainians and the international community.

“Canada has always been, is and, I am sure, will be our reliable partner. You came to our aid as soon as we asked for it. Unfortunately, however, the war continues. We need to do more for peace. Do more to stop Russia, to protect Ukraine and Europe from the total evil that is destroying everything: memorials, churches, schools, hospitals, neighborhoods and all our businesses. We do not ask for much. We ask for justice. We ask for real support that will help us survive and save our lives”, said the President of Ukraine.

State institutions of Ukraine and civil society organizations, including the Agency for Legislative Initiatives, continue to work almost around the clock, daily approaching Ukraine’s victory over the enemy. They are convinced, that Ukraine will withstand.