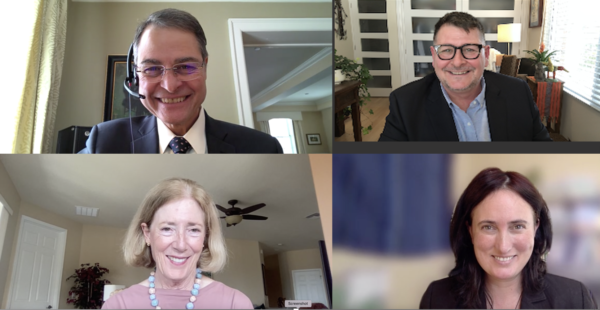 Ottawa, March 14, 2022. The Honourable Anthony Rota, Speaker of the House of Commons, met with the Parliamentary Centre on Monday to discuss new horizons on the Centre’s longstanding relationship with Canada’s Parliament.

The Centre’s Maureen Boyd (Chairperson), Tom Cormier (President & CEO) and Gabrielle Bardall (Vice President-External) exchanged with Speaker Rota to pinpoint ways of deepening the relationship between the Centre and Canada’s Parliament during this unprecedented moment in history. Speaker Rota noted helpful conversations between Canadian and international MPs during the pandemic around good practices in operating a legislature in virtual and hybrid settings. These exchanges promoted solid relationships and mutual learning. Looking forward, positive peer-to-peer exchanges like this will contribute to building positive relationships amongst present and former Canadian MPs in Canada and their global counterparts.

Since it was founded in 1968 to support Canada’s parliament, the Centre has enjoyed a unique, collaborative and strong relationship with parliament. During the meeting, the Parliamentary Centre reflected on this partnership and offered a vision of what it may look like going forward under the Centre’s new strategic plan. The plan focuses on how the Centre can partner with the Parliament of Canada to deliver more programming to strengthen democratic institutions globally.

The conversation addressed important programing areas from the Centre’s new EngageParlDiplo program with Carleton University that supports dialogue among and between legislators and diplomats about democratic institutions and critical policy issues relevant to Canada’s place in the world.  We also discussed the emergency response support the Centre has provided Ukrainian MPs and civil society and our growing engagements with parliamentary friendship groups and associations.

Concerned with the rising threat of populism at home and abroad and the historic threat that the Russo-Ukrainian war poses to democracy globally, the dialogue emphasized the importance of Canada’s re-investment in international democracy assistance at this particular moment in time. The discussion also reflected on the benefits of mutual support for new MPs worldwide (including the ongoing global trend of more women elected to parliaments) and bolstering MPs seeking to advance democracy in repressive environments.  It was stressed that such exchanges always result in mutual learning.