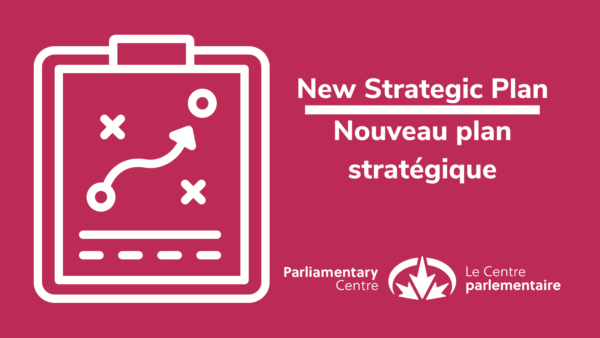 Founded in 1968 to support the Canadian Parliament, the Parliamentary Centre is Canada’s most experienced organization that works to support the development of inclusive democratic institutions and practices in legislatures, civil society groups and political parties domestically and internationally. However, the environment and context in which the Centre operates has evolved significantly over the past 50 years, and the Centre needs to evolve with them.

To this effect, we are undertaking new and important dialogues with the Government of Canada, the Parliament of Canada, current and former legislators, political parties and other democracy practitioners and researchers at home and abroad. This renewal process responds to consensus that Canada can and should do more to support democracy in a time of unprecedented global challenge – the rise of populism and the erosion of trust in democratic institutions.

The planning process will help us:

As part of the strategic planning process, we have had the opportunity to interview almost 100 actors from a range of backgrounds – including public servants, parliamentarians, academics, civil society organizations, as well as gender and democracy experts from around the world – to develop a thorough understanding of the current challenges facing democracy and find innovative approaches to remedy them. Listed below are some of the trends that have emerged during this process

Non-Democratic States and Actors: The rise of non-democratic states was described as the biggest threat to democracy by interviewees. Malign states have had a growing impact on the functioning of democracies internationally, by both offering alternate models to representative democracy and by disrupting democratic practices to erode citizen confidence. Another large portion of interviewees expressed deep concern over the role certain malign actors are playing in challenging domestic institutions and norms, from the election of Donald Trump in 2016 to Jair Bolsonaro’s in 2018. As such, several interviewees expressed concern at the emergence of authoritarian governments that use the trapping of democracy to justify their rule, and the lack of democratic checks to prevent this highjacking.

The Rise of Illiberal Democracy: Alternatively, concern was expressed over the election of leaders that ignore human rights and liberal norms. The implementation of “top-down” social management policies is a growing phenomenon in several countries in the process of democratization, but also in “old” democracies in North-America and Europe. Responses describing the lack of strong democratic leadership focused on these practices, along with the decline in states and individuals willingness to defend democracy. Put simply, there is a worrying divide growing between the practices of democracy and the liberal ideals that prioritize rights, freedoms, and accountability. This rise coincides with a generalized uptick in populist messaging that is in turn fed by mass disinformation.

Erosion of Trust in Democratic Institutions: The COVID-19 pandemic and its direct impacts on the functioning of democratic institutions around the world were also described as having the most significant short-term impact on democracy. Globally, weak and strong democratic institutions weren’t prepared to respond adequately to the pandemic, and the virus has exacerbated social divides. Several interviewees have pointed out that global economic disparities continue to rise and that other inequalities become more evident and more public. Simultaneously, the pandemic has been used to justify aggressive states of emergency, power grabs, and repressive measures against civil liberties in some countries. While most emergency plans require restrictions to rights and freedoms to respond to the pandemic, the post-COVID recovery will require heightened scrutiny.

Growing Forward: For too long, the focus of democracy support programming has focused on exporting existing models of representative democracy, however, this approach has had poor results and reception. Programming shouldn’t attempt to put in place existing democratic models, but rather, develop the skills and capacity to foster the independent growth of democracy and democratic procedures.

Canada’s Place: We’ve all heard the phrase “the world needs more Canada”, but we were struck at how urgent the call seemed to be from our international outreach. The message we heard was simple, the needs are urgent and Canada needs to do more in democracy strengthening. In a world where trust is in short supply, people look to Canada for leadership as a global champion on inclusivity, diversity and the respect for human rights. As one of Canada’s premier democracy strengthening organizations, this presents an enormous opportunity for the Parliamentary Centre to work with our government partners to design and deliver programming that will deepen Canada’s development impact.

Women’s Political Voice and Leadership: Canada’s efforts in prioritizing women and marginalized voices in political decision-making were recognized by virtually everyone we spoke to as the right thing to do. The Feminist International Assistance Policy (FIAP) has brought significant visibility to the need for more gender-sensitive programming. However, numerous practitioners noted that feminist approaches to democracy support remain weakly defined and investment in women’s political participation and empowerment is (and has historically been) underfunded. Enhanced measures to advance women’s political decision-making and support for more inclusive institutions are vital for advancing gender equality and crucial for sustainable change, from support to political parties to the adaptation of parliaments to  accommodate legislators from previously underrepresented groups. We also heard strong support for advancing women’s role in peace and security contexts.

Youth Inclusion & Education: With youth growing disillusioned with the political process, it is now more vital than ever to show them that they can be represented in politics. This means educating youth on how parliaments work, building their capacities so they might have the confidence to run for office, and utilizing the tools of the digital age to reach youth where they are most inclined to listen. Without the involvement of youth, it is impossible to grow with a nation, especially when the countries in which we work are made up of mostly young people.

We are now analyzing the data from our external and internal discussions and will be working over the next few weeks to draft our new strategic plan. We look forward to presenting you with the final product in the next quarter.

Return to the Infobrief

To learn more about the themes touched on above and other topics important to inclusive democracy, follow us on social media (links below) and subscribe to our infobrief.