NEWS RELEASE: Parliamentary Accountability for the Security Sector in Ukraine (PASS Ukraine) Will Strengthen Oversight by the Verkhovna Rada

Ottawa – The Parliamentary Centre today announced a partnership with the Kyiv-based Agency for Legislative Initiatives to develop and implement a new comprehensive capacity building initiative to strengthen parliamentary oversight in the Ukrainian Security Sector.

Working with the Committee on National Security and the Committee on Law Enforcement which have responsibility for oversight of the police and armed forces, the Parliamentary Accountability for the Security Sector in Ukraine project (dubbed “PASS Ukraine”) will bolster the capabilities of legislators to oversee and reform the country’s security sector, through expert support and engagements with institutions and officials in the European and Euro-Atlantic political, economic, and security sectors.

“The PASS Ukraine project is about helping Ukraine with oversight, transparency, accountability and best practice exchange relating to parliament’s role in the sensitive and critical security sector.” said Tom Cormier, President and CEO of Parliamentary Centre. “This partnership will also strengthen the capacity of parliamentarians and parliamentary institutions to support evidence-based discourse and oversight of security policy in Ukraine, paying close attention to inclusive practices and gender equality,” added Svitlana Matvienko, Chairwoman of the Board of the Agency for Legislative Initiatives.

The project will also explore strategies to professionalize and improve interactions between parliament and the executive branch of government. It enjoys the enthusiastic support of the 2 Ukrainian parliamentary committees mandated with security oversight.

This project is made possible thanks to the support of the Peace and Stabilization Operations Program (PSOPs) of Global Affairs Canada (GAC).

About the implementing partners:

Founded in 1968 to support the Canadian Parliament, the Parliamentary Centre is Canada’s most experienced organization working to support the development of inclusive democracies. This includes support for domestic and international democratic institutions, legislatures, civil society groups, and political parties. Our approach is non-prescriptivist and rooted in the active participation of citizens, particularly women and marginalized groups.

Established in 2000, the Agency for Legislative Initiatives is a leading Ukrainian think tank and programming NGO promoting democratic values and contributing to an effective policy-making process in Ukraine. Its mandate includes a particular focus on strengthening the institutional capacity of the Verkhovna Rada. 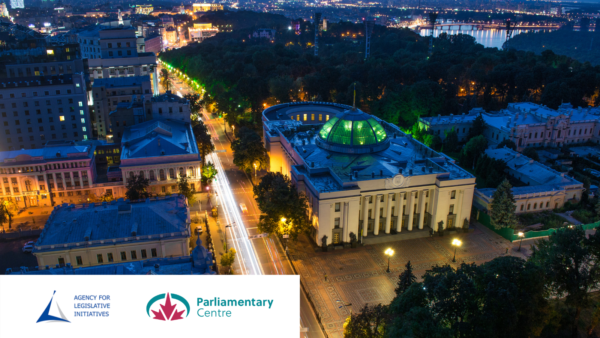