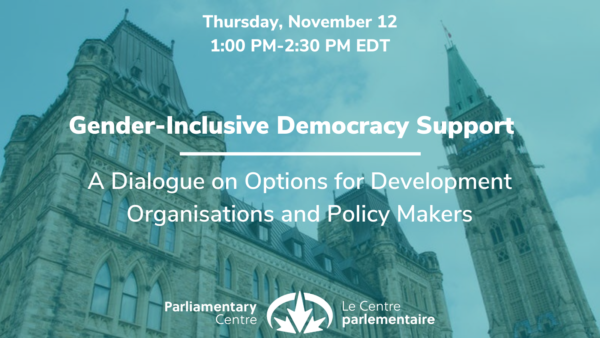 As one of Canada’s leading democracy assistance organizations, the Parliamentary Centre is committed to thoughtful and in-depth analyses of key topics in international assistance. We strive to connect global expertise, grassroots experience in international development with the latest research. This dialogue is especially important for us. Canada’s Feminist International Assistance Policy (FIAP) has brought a critical new lens to many areas of international aid, however democracy assistance has not been one of its focal points. We believe this dialogue will offer an opportunity to understand FIAP’s accomplishments and shortcomings in the areas of democracy & governance.

Human rights and gender equality are core Canadian values that are at the forefront of our foreign policy. The Feminist International Assistance Policy (FIAP) recognizes that supporting gender equality and the empowerment of women and girls is the best way to build more peaceful, inclusive, and prosperous societies.

FIAP focuses on innovation, targeted partnerships, and advocacy efforts with the most potential for closing gender gaps. It has resulted in historic investment in grassroots women’s organizations to strengthen a wide range of different focus areas, from agriculture to finance to health. One of the core action areas of the FIAP is to support Inclusive Governance. It also commits to encouraging greater political participation by women and girls.

Up to now, the action area relating to promoting women’s participation in politics and advancing feminist democracy assistance has been underappreciated and under-funded when compared to other areas of the FIAP. Given the long history of political and economic corruption in politics and democratic institutions, it is not surprising that there is uneasiness among many about investing in this sector. However, strong and inclusive democracy is at the heart of sustainable development and women’s full and equal participation in democracy is an essential driver of success. Democracy and governance support under the FIAP has not kept pace. Join us to explore the ways in which it can better meet these needs.