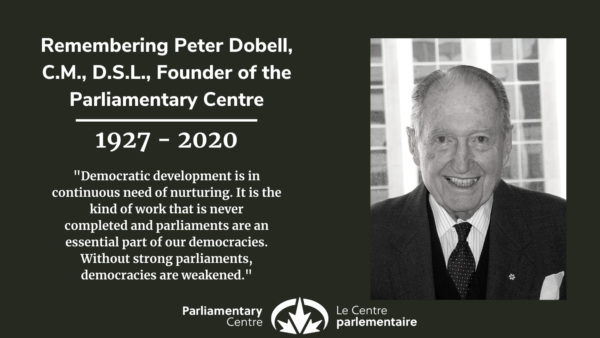 The Parliamentary Centre’s founder, Peter Dobell, C.M., D.S.L., has passed away at the age of 93. Peter was a visionary whose contributions to strengthening governance in Canada and abroad will not be forgotten. He was a pioneer in the field of international parliamentary development. Respected across the political spectrum, he inspired many to pursue critical work in this field. His legacy remains alive in Canada and in many countries around the globe.

When awarded the Order of Canada in 1991, the citation noted, He gave up a promising and prestigious diplomatic career in order to carry out his commitment to better government by founding the Parliamentary Centre for Foreign Affairs and Foreign Trade. Under his non-partisan stewardship, the Centre has become a catalyst for educating parliamentarians, especially in policy formulation. His guidance of a number of organizations has enhanced the stature of Canada’s representation at a wide range of domestic and international fora.

Our deepest sympathies go out to Peter’s family and friends. He will be dearly missed.

For anyone wishing to share tributes or testimonies about Peter’s legacy in democratic development, please do so via our social media or email us at parlcent@parlcent.org.