The Parliamentary Centre Supports the Peace Process in Myanmar

Since its independence in 1948, Myanmar has been suffering under one of the longest running civil wars among the country’s numerous ethnic groups, fueled by the lack of agreement on the constitutional fundamentals and the country’s model of governance. The first National Ceasefire Agreement signed on October 15, 2015 between the Myanmar Government and eight Ethnic Armed Organizations (EAOs) did not completely end the hostilities but strengthened the hope that peace can be achieved. Although it stipulated that Myanmar would seek to develop some sort of federal system of governance, the signatories (the Government, the Military and the EAOs) have yet to elaborate and reconcile their concrete views on the nature of this system.

With the support of the DeFehr Foundation, the Parliamentary Centre and the Centre for Development and Ethnic Studies (CDES) from Myanmar joined forces in supporting this process. They implemented a Workshop on Peace and Governance from November 23-26 2016, in Yangon. Over 60 leaders of EAOs, ethnic political parties and civil society organisations were exposed to the direct experience of international practitioners from the peace negotiations in Colombia and the functioning of a federal system of governance in Canada. But the event went beyond the sharing of international experience: it facilitated group working sessions allowing participants to formulate their own views on the models of governance adequate for Myanmar. This was the first time that these stakeholders deliberated together on these issues, helping them to understand and reconcile the nuances and differences in each other’s views and positions.

The event also incorporated a half-day Peace Forum, held on November 25th that targeted a wider audience of some 225 people including high level representatives of the Ceasefire signatories, political and civil society leaders and the development community. It provided an update and discussed various perspectives on the progress of the peace process in Myanmar while also highlighting experience and lessons learned from Colombia and aspects of Canada’s federal model of governance. An even wider Myanmar audience was reached through the coverage of the event by major newspapers and several TV channels. With the peace process moving along but being far from the end of its challenging path, the Parliamentary Centre and CDES are now formulating their next steps in supporting this endeavor. 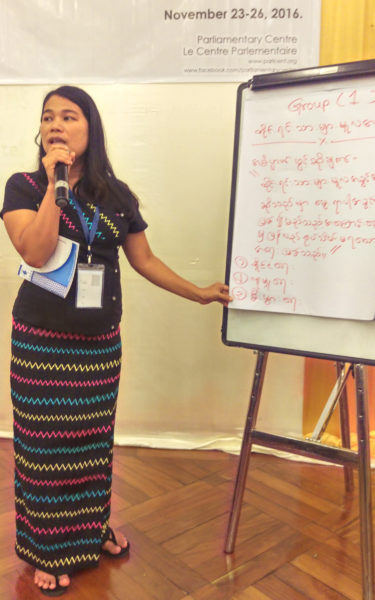