Visit of the delegation of Burkina Faso parliamentarians to Canada

The Speaker of the National Assembly of Burkina Faso, Dr. Salifou Diallo, was in Canada from May 28 to June 7, 2017, accompanied by a delegation of six MPs, of which three are women, as well as three senior parliamentary officials. This working visit took place as part of the project Support to democracy in Burkina Faso, funded by the Government of Canada and for which the Parliamentary Center is the implementing organization. This visit aimed to promote the exchange of experiences and best practices between Canadian and Burkinabe peers, with a view to help strengthening the capacity of the National Assembly of Burkina Faso. 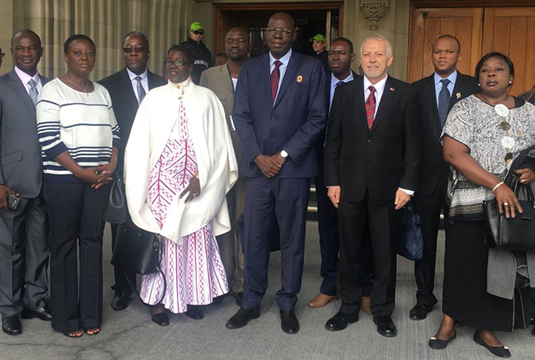 Key activites took place in Quebec City and Ottawa. They included discussions on the democratic development in Burkina Faso, peer-to-peer exchanges and bilateral meeting with key officials. In Quebec, the program was organized by the National Assembly of Québec, an official partner of the project. It included a bilateral meeting between Dr. Diallo and Mr. Jacques Chagnon, Speaker of the National Assembly of Québec; a meeting with Mrs. Christine St-Pierre, Quebec Minister of International Relations and La Francophonie; and other meetings with provincial MPs. In Ottawa, the visit included meetings with the Honorable George Furey, Speaker of the Senate, the Honorable Geoff Regan, Speaker of the House of Commons, and the Honorable Marie-Claude Bibeau, Minister of International Development and La Francophonie. There were also exchanges with Canadian parliamentarians, a working session with the Library of Parliament, as well as a roundtable discussion involving Canadian stakeholders on the Governance of the Mining sector – the Role of Parliament.

The testimonials of some MPs on their visit to Canada are available under the section “Our achievements“.