OTTAWA – Five senior members of the Ukrainian Parliament wrapped up a two-day visit to Ottawa, including a series of high-level meetings with Canadian government and parliamentary officials.  In a continued appeal for support from Canada, their message was consistent: an appreciation for Canada’s support for Ukraine, and an appeal to do more.

Headed by MP Lesia Zaburanna, MP from President Zelensky’s Servant of the People party and Chair of the Sub-Committee on Public Expenditures of the Budget Committee, the delegation held a private meeting with Prime Minister Justin Trudeau and Deputy Prime Minister Chrystia Freeland. Separate audiences were held with International Development Minister Harjit Sajjan; Canada’s Ambassador for Women, Peace and Security, Jacqueline O’Neill; senators Boehm (chair) and Harder (vice-chair) of the Senate Standing Committee on Foreign Affairs and International Trade; and with the Canada-Ukraine Parliamentary Friendship Group MPs as a group – an interparliamentary all-party caucus.

The delegation also attended a special meeting of the House of Commons Standing Committee on Foreign Affairs and International Development, providing a briefing on the wartime situation in Ukraine.

At a Friday press conference flanked by Canadian parliamentarians, the Ukrainian MPs stressed the humanitarian catastrophe unfolding in Ukraine, noting the destruction and human toll is inconceivable for a Canadian audience watching from afar in peace and security. The MPs stressed the need to urgently provide Ukraine with further military and financial assistance, and to introduce more sanctions against the Russian economy. The Ukrainian delegation explicitly asked for the expulsion of the Russian diplomats from Canada and from multilateral organizations where Canada is a member.

“Ukraine is very grateful to Canada for the support provided to date, however more aid is needed, and it’s needed fast,” said delegation chair Lesia Zaburanna. “Our delegation’s visit to Ottawa is an opportunity to meet with Canadian officials face-to-face and encourage Canada to further support Ukraine with the necessary military equipment, financial aid and impose more severe sanctions against Russia.”

The all-woman MP panel stressed the toll the Russian invasion is having on Ukrainian women in particular, noting that sexual violence is among the war crimes being perpetrated by Russian soldiers.

“They are killing our children, newborn children, raping our women; they are destroying and damaging our hospitals,” said MP Ionova.

“Russia tried to erase Ukraine from the map, but we have the courage and the will to resist this plan,” added former deputy PM Ivanna Klympush-Tsintsadze. “The West must demonstrate the courage and unity in the face of Russian aggression and take the necessary steps to do more to support Ukraine.”

In addition to official meetings, the MPs fanned out across Canadian media to deliver a concerted message that Ukraine existentially needs additional help, and that Canada needs to come forward with more support.

The Parliamentary Centre’s work in Ukraine is supported by PSOPs, Global Affairs Canada. We work in partnership with the Agency for Legislative Initiatives. 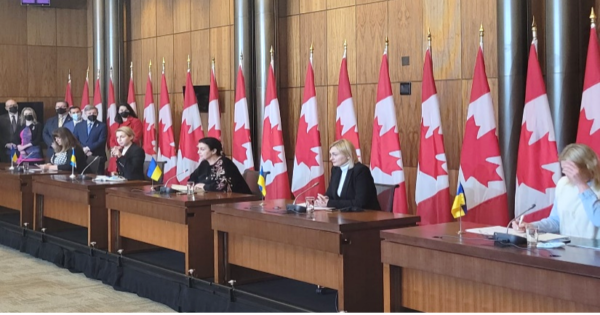